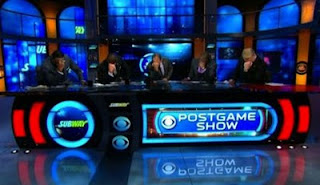 
NFL quarterback Tim Tebow has captured the attention of America. Yes, that is likely the understatement of this young new year. Twitter announced that 9,420 tweets per second were sent immediately after Tebow’s game winning overtime touchdown pass to defeat the Pittsburgh Steelers last Sunday. Everyone from Tom Brady to Lady Gaga weighed in.
People typically either love or detest Tebow. He is a polarizing figure based on both his football abilities and his unapologetic faith in Jesus. While I am not a Florida Gator fan (sorry, Tim & Kelly) or a Denver Broncos fan (sorry, John Fox), I am a Tim Tebow fan. He carries himself with class and maturity, and is an amazing witness for Jesus.
Some have said that God is causing Tim Tebow to win. I’m not so sure, though, that God plays favorites when it comes to sports. Think about it:
- As much as we want to believe that God’s favorite team is the one we root for (Go Duke!), God loves all players, coaches, owners, teams, and fans the same.
- In most games, there are likely Christian fans of both opposing teams each praying to God for their team to win.
- There are many Christian athletes, team owners, coaches, and fans that lose a lot.
- There are many nonbelieving athletes, team owners, coaches, and fans that win a lot.


When I am asked to pray for individuals or teams prior to sporting events, I pray...
- That God would be glorified by the conduct of the athletes, fans, and coaches.
- That the players would play to the best of their abilities.
- That there would be no injuries.


Still, the evidence that God is on Tebow’s side mounts. When he played for Florida in college Tebow would wear John 3:16 under his eyes, as seen here. 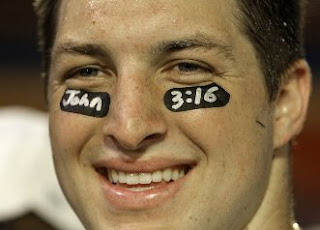 John 3:16 concerns salvation, “For God so loved the world that He gave his one and only Son, that whoever believes in Him shall not perish but have eternal life.“
The NFL does not allow players to wear the black eye-messengers. No problem apparently. In Sunday’s win, Tebow threw for 316 yards. He averaged 31.6 yards per throw. The TV rating for the end of the game was 31.6. Really. No joke.
Now, I am not one who is big into numerology. Did God cause Tebow to achieve these specific numbers? Maybe. Are the numbers just coincidence? Maybe. What I take from this number stuff is joy because a lot of people are now talking about John 3:16, doing Google searches for it, and looking it up in the Bible...because of Tim Tebow.
God certainly must be pleased with the way that Tebow carries himself, how he represents the faith, and the manner in which he handles adversity. The cool thing about Tebowmania is Tebow’s example of using his position in life as a platform to witness for Jesus. He is an inspirational reminder that we can all represent Christ wherever we find ourselves with the gifts that God has given us. We don’t have to be NFL quarterbacks. We can represent Jesus in our everyday lives as bankers, students, homemakers, JV athletes, or whatever.
Tim Tebow is clearly an unashamed, faithful witness for Jesus. Can we say the same?
Posted by Kyle at 5:11 PM