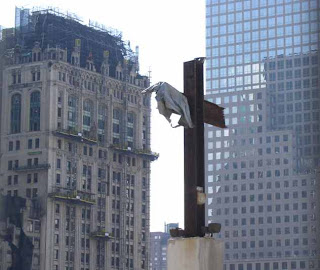 Since 2001, I make an annual phone call on September 11. I call my friend, Carmen. We grew up together and have remained friends since. I officiated at her wedding to her husband, Craig. Carmen and my wife have become close friends. On September 11, 2001, Carmen was living one block from the World Trade Center. She saw the planes hit. Then she ran for her life.

Like many of you, I remember exactly where I was at that same moment. I was attending a preaching conference at Lake Junaluska, NC. We were on a break. People were huddled around a television in the lobby. The first plane had just hit. I sprinted to my room, grabbed my phone, and dialed Carmen's cell number. The lines were jammed as thousands of other people were calling loved ones in NYC at the same time. I finally got through to Carmen as she fled Manhattan on foot, covered in soot in the midst of a mob of survivors. She wanted to know if the world was at war. I was relieved that she was alive. Sadly, almost 3000 people in New York, DC, and Pennsylvania were not.

On the ninth anniversary of 9-11, controversy and violence are still in the air. Osama bin Laden and al-Qaeda are alive and well. The United States is at war in Afghanistan and Iraq. A proposed mosque near Ground Zero has stirred up all kinds of emotion. A small church in Florida plans to burn copies of the Koran, gaining negative attention from the President himself along with most of the world.

Where is God in all of this?  Here's what I believe:

I believe that God is with the survivors and with the loved ones of the victims.

I believe that God is in New York City, Kabul, Baghdad, and Gainesville...that God is weeping because we continue to hate, fight, and kill one another...that vengeance belongs to God, as does grace.

I believe that God loves Americans, Christians, al-Qaeda, and Muslims...that God wants us to love each other, especially our enemies.

I believe that the Holy Spirit wants to reconcile everyone to God through Jesus...that God doesn't think that hatred expressed by Christians is the way to lead people to Christ.

I believe that even as God allows us to act with free will that God is ultimately in control...that the battle against evil has already been won on the cross.

I believe ultimately in a good ending to all of this.